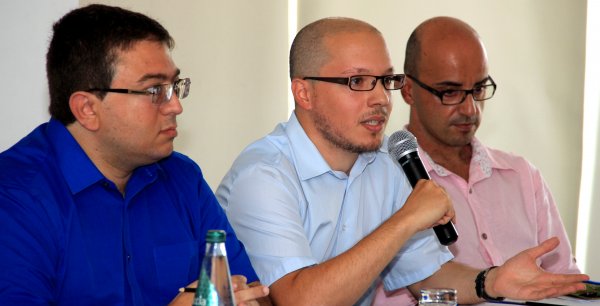 The club caught up with co-founder and current Vice President for Team Matters & Club Secretary Dr. Michael Calleja to talk about his SIX year experience with SUFC and how he has seen his idea grow into one of Malta's most promising football clubs:

Question Number 1:
Mike, you were one of the first persons to form the club. Did you ever imagine the club would be where it is today?

Answer:
To be honest, no. I thought we would take much longer to achieve what we initially set out to achieve. Having said that, once we obtained our own premises, I always felt confident we could go places. We always had a grand vision and achievable dreams - we just needed the infrastructure and personnel to deliver. Thankfully, we now have these two key elements but there is still so much work to be done! Nevertheless, I am proud of all the hard work we have put in - it's great to look back and see so many results. We've created so much history within a short space of time. I doubt any other club on the island has achieved what we have accomplished. Within the space of 5 years, we have opened our own premises, we have a great facility, we have a fully fledged Academy together with an Under 17, Under 19, Seniors, Futsal and Women's team. This is certainly a special club and one I am proud to form part of.

Question Number 2:
If you could turn the clock backwards, would you change anything in particular?

Answer:
I am not really one to dwell too much on history, but if there is one thing I could change is a few of the Committee members. In the past, we brought in people who did not have time or were not interested in football. I think this should be a lesson to all football clubs and sporting organisations - whenever new people are brought in they should be committed - I would rather work with a small group of people rather than fifteen. I think there were times when we entrusted certain projects with a few people who could not deliver and the club ultimately suffered. In hindsight, I should have acted quicker and put forward motions for their removal. Joining Swieqi should not be a hobby - but a vocation; a vocation which I can promise leads to immense satisfaction.

Question Number 3:
What do you think is the key to success at the club?

Answer:
Without any doubt the present Committee. The coaches and players all play their part but everything stems from the top. I think this is the best Committee we've ever had and players and coaches always respond to good management. We need to ask ourselves some basic questions: Who motivates the players? The coaches. Who motivates the coaches? The Committee. But what motivates the Committee? This is certainly a tricky question. However, I motivate myself with projects and targets. Thankfully this present committee has goals and ambitions which can be realised as long as we all work hard and keep ourselves motivated on a daily basis. Success will automatically follow.

Question Number 4:
Many have admired the way in which the club is run and maintained. How important is such image for you?

Answer:
Swieqi is not just a football club, but a brand. We expect people to adhere to the brand and its principles. This image has been built over a period of five years. Whenever Swieqi is mentioned, people realise that this is a serious and well-run club. Therefore image is everything! Thankfully we get very positive feedback from players, coaches and parents. They realise that good management goes hand in hand with seriousness and we've always endeavoured to ensure we run this 'amateur' club on a 'professional' basis.

Question Number 5:
What are your visions for the seasons to come?

Answer:
I won't give away too much as some matters are confidential but the most important thing is that we keep working hard on our Youth Sector, continue to invest in good coaches and ensure the players always have good facilities to train on. Players that commit themselves wholeheartedly to the club (no matter their age) will be rewarded and as a Committee Member, I can assure all Swieqi players that I will give my 100% every day. I believe in this project and I want us all to succeed. The town of Swieqi deserves the best and I will endeavour to ensure it will be the best.

On behalf of everyone at SUFC, we wish to say a big thanks to Mike for all his hard work that he has done for the club, does, and will surely continue to do