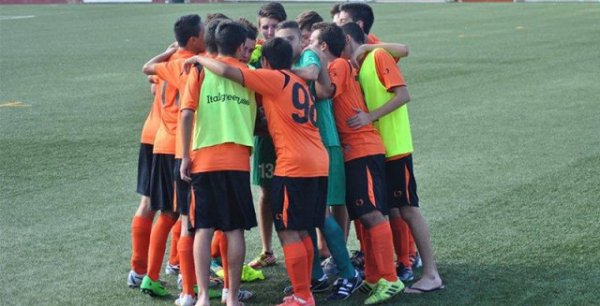 The game began just a little after 1pm at the Melita FC football pitch. The first 5 mins were characterised by a highly contested midfield battle. Jon Ferry took the first shot of the game after some good midfield play. Birzebbuga reacted in somewhat similar fashion. Martin, Ferry and Dimech combined well and each took a chance at goal. Then came the first of many decisions made by the referee that were easily contestable. Mark Martin was right on goal when he was dropped in the penalty area by the outstretched arm of the goalkeeper. Instead the ref gave Martin a yellow card. Swieqi’s dominance was strong and they came close once again when Mallia threaded a good ball in towards Dimech who was unlucky to miss. Tortell was then dropped inside the box but the referee waved play on and the Swieqi fans were incensed. The half started to  come to a close. The captain today Nick Xuereb led the defence composed of Caruana Montaldo.B, Zammit and Galea. Together they ran smoothly and the goalkeeper Gatt came out very well to sort out a few untidy balls. As the 38th minute was coming to a close midfielder Tortell took a shot from outside the box. The keeper fumbled and in came Ferry with the goal 1-0 to Swieqi.

The second half began very much like the end of the second half with Swieqi pushing all over the pitch. Martin had a great chance before Dimech scored a great header only for him to have it ruled out due to a foul. Dimech then took a freekick before himself and Mallia were substituted by Micallef and L. Caruana Montaldo. Xuereb came close as did L. Caruana Montaldo . 52nd minute in came Sant Fournier and slotted in easily. Swieqi had another penalty call denied as Birzebbuga tried to come into the game as much as they could but some great presence by our defenders and goalkeeper kept them out of the game. The next few minutes were characterised by some great play from Xuereb and Tortell, the latter coming close to getting his name on the scoresheet. On the 66th minute mark Tortell found Ferry who scored his second of the match to make the score 2-0. Darmanin and A. Galea were brought in. Swieqi United played out the rest of the half in similar fashion to run out as winners in their league debut game against Birzebbuga. F.T. 2-0.