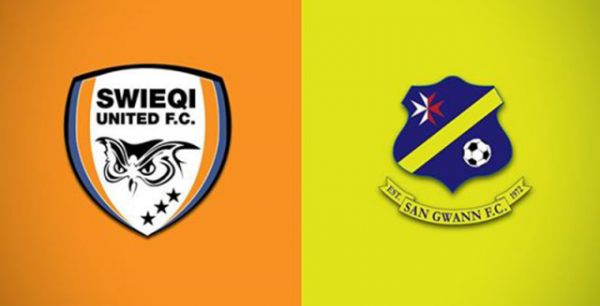 BOV 2nd Division: San Gwann 1 Swieqi United 0. A goal scored in the 82nd minute by 15 year old Jan Tanti gave the 3 points to San Gwann in the first derby played between these two clubs. With Matthew Mulholland starting once again as Goalkeeper, Debrincat opted for a solid back four of: Matthew Asciak, Kurt Pisani, Glendon Refalo and Neil Gatt Coleiro. The defence held firm throughout the match whilst the midfield was as every industrious with Jeremy Gatt Coleiro and Jon Briscoe White cutting down attack after attack. The Orange could have taken the lead in the first half when Briscoe White's shot went agonizingly wide. San Gwann did begin to grasp the initiative in the second half with some dangerous attacks. The Yellows went close when a free kick hit the bar before finally capitalizing 8 minutes from time after a shot from close range - much to the dismay of the Swieqi clan. Swieqi did try to search for an equalizer but San Gwann's defence could not be breached. The Yellows hung on to a deserved win after a more aggressive second half. For Swieqi, it's back to the drawing board however the Orange can be satisfied that they are proving to be a very difficult team to beat - a fact which is now well know amongst the local football community.  Formation: M. Mulholland, M. Asciak, K. Pisani (C), G. Refalo, N. Gatt Coleiro (O. Smeir), P. Briscoe White (G. Buttigieg), J. Briscoe White, J. Gatt Coleiro (R. Marmara'), M. Farrugia, L. Konda, K. Ekezie. Subs not used: M. Fenech, C. Cutajar, K. Sultana, L. Burlo'