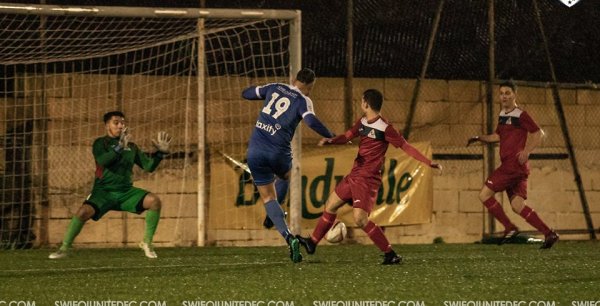 In awful conditions, Swieqi United inflicted another defeat on rivals Pembroke Athleta in an Under 19 league clash at the Siggiewi Ground. Played in the seething rain, both teams took some time to settle, although the Orange gradually managed to impose themselves on proceedings.

Timmy Muscat, who was forced to play in attack after a multitude of injured players, scored with a very well taken goal in the 24th minute, and indeed, the Orange could have certainly scored more had they been more clinical in front of goal.

In the second half, Muscat rounded the keeper to make it 2-0 in the 54th minute, and Luke Zammit added a third with a well taken goal from outside of the box in the 70th minute. Towards the end of the match, Pembroke scored with a great shot and Swieqi United had to dig deep to survive the final five minutes.

The match was notable for Isaac Ruggier making his full debut for the team, putting in a solid performance accordingly. The recent problems to the team caused by injuries has forced the club to dig deep into its resources but pride can certainly be taken from our Under 17 teams players making the grade and playing with passion and determination.