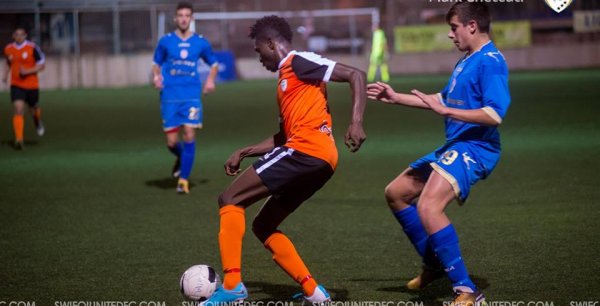 Swieqi United made it a perfect nine wins from nine games, ending the first half of their Youth League Section C commitments on the highest of highs, following a 6-0 demolition of Msida St. Joseph at the Charles Abela Stadium, Mosta.

In the first half, play was initially quite balanced between the two sides, with Msida creating some chances, albeit not really troubling goalkeeper Edward Gatt. However, the tide turned in the Owls' favour following their first goal - Tejumola Ebenezer Ayorinde nodding in the ball past the hapless Msida goalkeeper, who had parried his initial shot. Two minutes later and Swieqi doubled the score thanks to a superb shot from distance from Luke Zammit which rebounded in off the post. This lead took the wind out of Msida's sails, and from there onwards, it was pretty much all Swieqi. Ayorinde then made it 3-0 right on the stroke of half time with another rebounded goal.

The second half was more of the same from the Orange, who kept on dominating proceedings. Rodrick Theuma converted a penalty to make it 4-0 after 55 minutes, while the returning Jake Scerri hit a beautiful daisy cutter from distance one minute later to add further gloss to the scoreline. The rout was completed seven minutes from time with yet another goal from distance, this time from Theuma, who completed his double in some style.

At the end of the first round of fixtures, Swieqi have a maximum 27 points from 27, and lie eight ahead of their nearest rivals Tarxien. The next league fixture will be against Fgura United at the Fgura Ground on the 30th November.