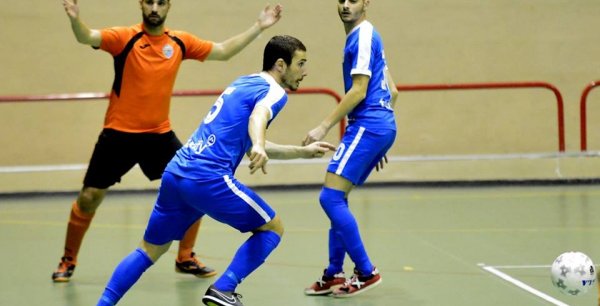 14.11.17 Futsal: Seniors with a clinical victory to edge closer to top 5 finish

With a ferocious storm brewing outside, the brave that turned up for this match were thankful that it was taking place indoors. Having been involved in action a mere three days before, Swieqi's Seniors took on Marsaskala, knowing that a win would push the team closer towards achieving their top five target.

In the end Marsaskala offered little resistance, despite playing almost the entire game in their own half defending Swieqi's continuous attacks. After numerous chances through Zurab Lukava, Christian Wismayer and Shota Chanukvadze, Swieqi surged into a slender 1-0 lead thanks to Lukava, after receiving an excellent pass from team captain Chanukvadze. Swieqi continued having chance after chance to double their score, with Ryan Xuereb finally managing to double the lead three minutes from the end of the first half. Marsaskala threatened in the last two minutes, with fine efforts from Akessio Restucchia and Aurelio Burgio being saved by goalkeeper Jacob Cipriott. Dylan Micallef's penalty was saved by the Marsaskala custodian with a minute to go, leaving both teams heading into the half time break with the score 2-0 in Swieqi's favour.

Swieqi continued to enjoy long possession spells in the second half. Christian Wismayer's corner in the sixth minute was turned in off the post by Marsaskala's goalkeeper Glen Farrugia to further increase the lead for the Owls. Despite being under immense pressure from Swieqi, Marsaskala had another two great chances by Robert Zammit and Reuben Degabriele saved by Karl Balzan. Dexter O'Brien put Swieqi 4-0 up through a great finish, with Robert Zammit scoring an unfortunate own goal towards the end of the game to give Swieqi a comfortable 5-0 lead.

Swieqi next take on Junior College on Thursday 23rd November at 9.15pm at Corradino, whereby a win can guarantee a top 5 finish.