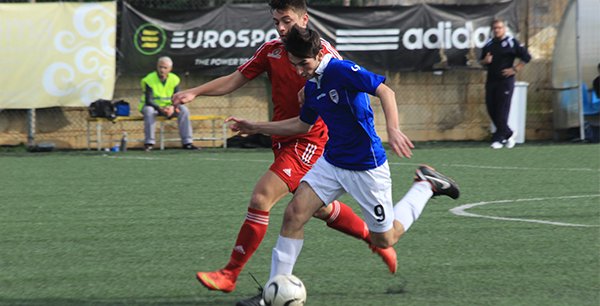 Swieqi United’s boy ran out for their first game of the year 2015. After a few checks by the referee and the linesman the game got underway. Fgura’s men hit one long, the ball took a bounce and Fgura’s forward ended up one on one with Gatt who could do nothing to keep it out in the 3rd minute of the half. Tortell then had a good run before Fgura took another chance at goal. From this point the Swieqi lads got the ball on the floor and started a siege on the Fgura defence. Ferry and Galea both had good chances from some good midfield play by L.Gatt and Zammit. Defenders Sant Fournier, B.Caruana Montaldo, Vella and L. Caruana Montaldo seemed to have gotten their act together today, playing a perfect passing game. Good possession soon translated into more chances from Martin and Galea. The referee today seemed confident in all his decisions but could have easily called a penalty for Swieqi after 29 minutes. Micallef came on for A.Galea and J.Galea for Sant Fournier who suffered a heavy knock. Martin kept on pushing for a goal before being fouled again by Fgura’s number 2. Ferry, J.Galea and L.Gatt all tried their luck to no avail as the half ended with some scrappy midfield play.

Swieqi’s boys came back on the field and began to push their opponents from the start. Another foul on Martin resulted in a penalty. The brave Vella, who was having a superb match, stood forth to take it. It was not to be though as Swieqi kept giving it their all. Martin and Ferry both got some shots in before Johnson was brought on for Tortell. The pressure then seemed to pay off as L.Gatt looked like he had scored as agonised faces watched on. Coach Paul Gatt brought winger Dimech on for Micallef and late on brought Mallia for a tired L.Gatt. The last minutes were a scrappy affair with Fgura going close on the counter a couple of times with L.Caruna Montaldo clearing superbly off the line. Fgura ran out winners on the day but a massive congratulations must be given to the boys in blue who played with good intent and showcased great maturity in their wonderful, beautiful football.